Just wanted to let allyuh know that Lemtrada Round 2 is next week Wednesday.  I got lucky.  when I found out that it was going to be in October, I made sure that it could be scheduled after Columbus Day so I wouldn't miss Miami carnival again because of it.  turns out that was a non-issue though cuz I'm not even going.  anyway...

it's 3 days this time so I'll go in next week Wednesday - Friday.  remember, each day starts with an hour long steroid infusion and I truly believe the 5 days last year is what made me sick afterwards.  I'm hopeful that this time with only 3 days, I'll be okay.  I've had 3 days of steroids before without issue, so why should this time be any different? right??? time will surely tell...Also, u know that my hero days are over, so I'm on leave again...actually don't go back to work till the 24th.

In my last post, I mentioned that I had a story about me and the scooter in the airport.

So a few years ago, I went to Houston for a weekend. Every time I travel, I go to my gate and get a gate tag to attach to SS (it's  pretty much a baggage claim ticket if u will - one piece (with a number) goes on the scooter and I have another (with the same number)). I roll down to the door of the plane, board and trust that the ramp people will take the scooter to the hold of the plane and I'll reverse the steps when I reach where I going. Well...

The plane landed in Atlanta and as usual when everyone had gotten off, I started making my way to the door and the air hostess said, "just a sec; ur scooter's not here yet." Ok. No worries. I'll just sit in front and wait; they must just be running behind. However many minutes later she started calling around to find out what was happening and that's when we found out that "I'm so sorry miss O'Brien but ur Scooter is still in Houston." 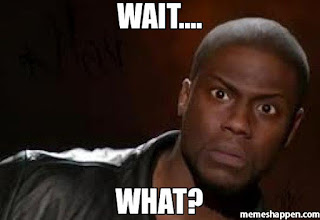 A wheelchair came for me and took me to the Delta office where I was asked to wait because the scooter would be on the next flight to Atlanta that was coming in an hour or two later. "Great"
So the time passed and a man walks in and said. "Good news. The flight just landed. Tell me what it looks like and I'll bring it for u". I described SS and handed him my gate tag. Half hour or so later he still hadn't come back. Atlanta airport is too big for its own good (if yuh ask me) but it eh dat big...I knew something was wrong. Sure enough he came back scooterless. Here's what happened:

I eh go lie. When the man told me, I was so confused - wait...wha? no scooter? what u rhelly want me do now??? The delta agent in Houston couldn't stop apologising. They gave me the wheelchair (I said thanks but I cannot use a chair at all so it was of little use) and at 9pm that night, a driver appeared with my scooter. I got money, I got apologies and I got (even though I had to ask for them) miles.

Luckily that was the only bad experience I've ever had and hopefully I'll never have to go thru anything like that again.
at 09:31 1 comment:

A few Saturdays ago I went to a wellness expo hosted by the MS society. Was a good use of my time - heard some things I already knew and learned some new things too. There was a neuropsychologist there from Shepherd Center who gave a familiar story about his first MS patient.


Speaking of scooter...Soca Scooter has given me 4 long good years. He lime, he wine, he fete up a storm, he is my partner in crime at the airport (I have a story bout this for allyuh)...we've been thru a lot together but alas, I think that I may need to retire him soon.
Originally I was going to run him to the ground but I have a vision in my head of my driving along minding my own business somewhere and he just stops...and then what'll be my story - not a good idea. The one vendor at the expo in which I was interested was a mobility store where I found my next scooter. It's a folding scooter and so essentially it collapses with a click of a button into something a lot like a carry on piece of luggage. One "problem" with this one is that the top speed is 4mph; Soca Scooter is 5.  The difference between 80 and 81 mph, I may not notice but 4 and 5?...ugh! but clearly I'll need to get over that fact at some point. Hopefully this one will also be able to lime, wine and take jammin like good ole Soca Scooter.

I'm not a stubborn person usually but when it comes to the conflict between me and the MS with respect to the sun and heat I am stubborn to a fault - ALWAYS. Last week Monday morning I went to a rooftop breakfast fete - this fete tho is not ur typical breakfast fete in that it starts at 8am. There's a covered area and a section that's open. Do I try to lime/stay in the covered area? Never. In fact last year ASal asked me if I wanted to get out of the sun (it was still earlyish and it wasn't bothering me yet and I remember scoffing at her wondering why the hell she would suggest that; she was asking from an MS perspective - MS wasn't even on my mind...I'm stupid, I know).

So I usually get there between 8 and 9 so no problems then but by 11/12 it's a whole nother story! This year, the open area had sheets of fabric draped over to offer some shade so I sought refuge there but still I was hot fuh so. I could barely work the controls to reverse the scooter into the shade and by the time I got there I was seated for most of the rest of the party. 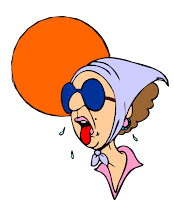 Every time I stood, I had to be helped up. The other thing I noticed is that I couldn't speak loudly at all. was like every time I spoke to someone I was whispering - which makes no sense when u trying to shout into somebody ears over loud music. I was completely drained of strength/energy. Steups but will I stay under cover next year? No promises

I took a really long time to cool down and get back to normal...in fact I don't think it happened till I reached back home.  I ate a plate of food and went straight to bed...slept straight thru till Tuesday morning...but it's okay - it was all worth it kinda/sorta...party was nice!
at 08:48 1 comment: